God is faithful, even in difficult and confusing times;

I can trust Jesus to be faithful to me

ASK:  What is the most difficult thing you have ever done?

What is the hardest thing you have ever had to go through?

SAY:  We have been talking about how Jesus solved our greatest problem: how our sin separated us from God.  Now let’s talk about one of the hardest things we will ever face:  death.

This is a story about a man who Jesus LOVED.  Listen to what happened.

ASK:  Do you think Jesus could have healed Lazarus before he died?  Why didn’t Jesus heal him?  (Did he not love him enough?  Was he not able to do it?)

SAY:  Jesus had a PLAN to do more than heal Lazarus.  He would show His friends something GREAT about himself.    Jesus could have healed His friend Lazarus, but He allowed him to die.  He knew this would be hard for his friends, but knew it was for the best.  Now they would see that Jesus had power over everything, even death, and that He was strong enough to save them.

ASK:  What do you think Jesus showed them? (Review verses 25-26.  Jesus wanted them to believe in Him, that He was the resurrection and the life.)

(After the acting time, SIT BACK DOWN AND DISCUSS the following points).

SAY:  SOMETIMES, Jesus does things that we may not understand, in order to give us something even better.  You know something else about this story that gives us hope?  Even though Jesus knew He was going to raise Lazarus to life, when He saw the grief his friends felt, Jesus wept.  He cried!  He still feels our sorrow with us even when He knows what is going to happen.

ASK:  Have you ever gone through something very hard, and you didn’t know why?

Does Jesus still care for you when you’re hurting and it seems like everything has gone wrong?

What can we learn from the story today?

What do you think God wants you to do about what you learned today? (If this question results in few responses, give the campers time to reflect.  Silently pray for their souls to be filled an awareness of Jesus).

MEMORY VERSE:  JOHN 3:16: For GOD so loved the world that He gave His one and only Son that whoever believes in Him shall not perish but have eternal life. (Use TRUTH books to help commit the verse to memory).

PRAYER:  Pray together as you are led by the Holy Spirit.  Thank God together for the great HOPE we have of living forever with Him!

Explain how we are like caterpillars/butterflies when we begin a new life in Christ.  2 Corinthians 5:17 says “Therefore if anyone is in Christ, he is a new creation—the old is gone and the new is come.”  This is an incredibly encouraging verse.  Just like a butterfly, we are new creations! 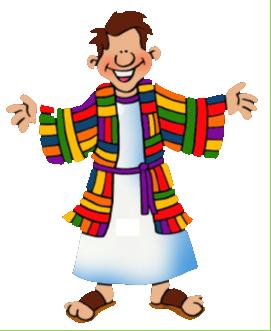 God watches over me in difficult times.

God is in control and near to His children.

In times I can’t control, I can trust God.

Morning is a good time to review memory verses.  Review Truth, Faith and Hope memory verses using the TRUTH Book.  Consider giving your personal testimony at this point, especially if it helps underline the point that God is at work in our lives even when we don’t understand it.  Point out that we all have, or will have some day, a story of how God works in our lives.

ASK:  What do you do when it seems like everything is going wrong?  When bad things happen in your life, what do you do?

SAY:  Today we are going to look at the life story of JOSEPH from the Bible, in the book of Genesis. Joseph was an orphan.  His mother died when he was around seven years old, giving birth to his younger brother, Benjamin. Joseph had 10 older half-brothers.  They all had the same father, whose name was Jacob.

Joseph’s older brothers hated him, because his father Jacob favored Joseph and Benjamin. He had loved their mother very much.  The older brothers also hated Joseph because he had prophetic dreams.

This means he had dreams that told of future events, and he received a lot of attention because of this.  His brothers were jealous.

One day, Jacob sent Joseph to find where his brothers had taken the flocks and to report back to him.  Listen, as I read, for the characters in the story and listen to the things that happen to Joseph.  When something GOOD happens to Joseph, wave your hands and cheer quietly (demonstrate).  When something BAD happens to Joseph, moan and look sad (demonstrate).  Okay, are we ready to hear all about Joseph?  (You may have to lead them through these things that happen and pause to see what they think)

What did God show Joseph would happen to him in his dream?

What did Joseph’s brothers think of this dream?

What do you think will happen next to Joseph?

SAY: One day Joseph’s father has sent him to his brothers in the field. Let’s read to find out what happens next. (Remember to have the continue to point out when something bad happens to Joseph)

Summary: God gave Joseph the gift to interpret dreams and his brothers were jealous of him. The decided to kill him, but changed their minds and sold him as a slave. Joseph went off to Egypt as a slave and there he is sold to a man named Potiphar, the Egyptian Captain of the Guard. God blesses Joseph and Potiphar likes him. Everything appears to be getting better – he is given control over everything in Potiphar’s house. But later, Potiphar’s wife falsely accuses Joseph of attacking her.

READ: Gen. 39: 19-23 (You may display the teaching picture Joseph in Jail after reading to summarize the passage)

ASK:  What did God promise would happen to Joseph?

Did God give Joseph this promise right away?

When Joseph was in jail, how do you think he felt?  How would you feel?

SAY: Even though it was very hard, Joseph knew he could trust that God was in control, and that he would fulfill his promise to Joseph. Joseph does not lose faith in God. God blesses him in jail and he is given control of everything in jail. While Joseph was in prison, he also helped interpret dreams for some of the King Pharaoh’s officials who had been thrown in prison, and some time later one of the officials told the king that Joseph could help interpret his very disturbing dreams.  Joseph is called in to explain the meaning of the king Pharaoh’s dream.

SAY: The king explains his dream and Joseph, using God’s power, tells him what it means and advises the king what he should do about it.

READ: Genesis 41: 37-43 (Teaching Picture: Joseph before Pharaoh; you could display this while reading)

How did God fulfill his promise to Joseph?

Was God good to Joseph?

SAY: Later God brings all of Joseph’s family, including his brothers to Egypt, where he is second only to the King/Pharaoh. The famine has been hard throughout Egypt and his brothers are sent by his father to buy food. Joseph’s brothers come to him not knowing who he is.

ASK:  If you were Joseph, and your brothers who had sold you into slavery came to you asking for help, what would YOU do?

After discussion, read these two verses:

SAY:    The story of Joseph is like our stories.  God has made promises to us:  eternal life, forgiveness of sins, a new life.  But we may face hard times, maybe for years.  Our hope is this: when our story ends, we will have been raised up to the King’s right hand!  Even when hard times seem hopeless, God can fill your heart with joy and peace as you trust in Him.

ACT IT OUT:  Pick one of the three parts of this story to act out:  (1) Joseph is sold to the Egyptian caravan; (2) Joseph is called out of prison and interprets the Pharoah’s dream; or (3) Joseph forgives his brothers.  Identify the characters together and assign roles.

God watches over me in difficult times.

God is IN CONTROL and near His children.

In times I can’t control, I can trust God.

God is our refuge and strength, a very present help in trouble.  Therefore we will not fear, though the earth should change, and though the mountains slip into the heart of the sea.”

PRAYER:  Give thanks to the Lord for His Truth and the hope that we have when we put our trust in Him.  Pray as you are led.  (Invite campers to pray sentence prayers out loud.)

Using fine-tipped markers, help campers write the first part of the memory verse NEATLY on their plates:  God is our refuge and strength, a very present help in trouble. Decorate the plate edges with stickers, markers, crayons or glue and glitter.  Be creative.

(NOTE:  This is an easy craft designed to allow you to meet with your campers one-on-one to talk and pray with them about receiving Christ, if you have not already begun to do this.  Find a quiet place where you and each individual camper can talk and pray together. Leave your assistant with the group; if you need help interpreting please ask camp staff.)